For the past couple years, Tabitha and I have been regularly attending the most wonderfully awesome beer tasting dinners hosted by one of our favorite local restaurants: Sunspot. These delightful dinners happen the second or third Monday of the month and feature five incredible courses paired with five great beers for in the $40-45 range. The beers all come from a single craft brewery (although last month was the first ever "collaborative" beer dinner - did I say awesome already?), with examples like Terrapin, Sweetwater, New Belgium, North Coast, Sam Adams, Sierra Nevada, Yazoo, Starr Hill... the list is only limited by the distribution (which, in TN, sadly is limited - but they do quite well nonetheless). 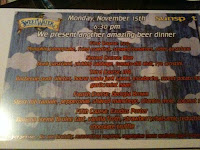 Yesterday we dined a Sweetwater-themed dinner with Rocket Scientists AJ, Vikki, Les, Ann, and John, and some other good friends. As usual, Chef Brandon rocked an incredible menu with each course pairing perfectly with the beers. My favorite was the Sweetwater Blue paired with duck pastrami topped pickled cabbage on a rye crostini biscuit surrounded by tomato dill aioli. Now Blue (or any fruit-flavored beer, really) isn't at the top my list, but it is a solid beer, and the blueberry flavored wheat really balanced well against the perfectly cooked meatyness of the duck and the sweet pickeled onions and cabbage, and the dill gave it a great herbal savor. Yum. Before I knew it I had more more blue in me than a smurf. It takes a great chef to take a beer that I'm not super crazy about and make it my favorite pairing of the night. 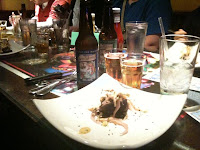 The best part for a beer lover about these beer dinners is the chance to try beers new to the Knoxville market and beers that aren't available around here yet. Out of the five beers (or sometimes six if it's a really awesome brewery and they throw in a bonus brew!) typically one or two are the mainstay or flagship labels, and the other 2-4 are seasonals and cool new beer. There have even been times when a beer that isn't sellable in TN due to our crazy liquor laws was trucked in straight from the brewery to our table. How great is that? Some highlights that stuck in mind included Terrapin Hopsicutioner, Big Hoppy Monster and Gamma Ray, New Belgium's Tripel and Dubbel, Sierra Nevada Celebration and Big Foot, and Pranqster and Brother Thelonius from North Coast.

So, this time next month be on the lookout for the next great beer dining experience in Knoxville. I also encourage everyone reading to check out what their local restaurants are doing with craft breweries and get excited about great beer!
Posted by Chris at 5:35 PM