A few shots from our last brew day.  Nice.

A couple weeks ago, I received your email, titled "Free Shipping". "What is this?", I thought. "Could this be an actual deal that I could use?" Alas, no. You suckered me again with "Free Shipping" on a very select, expensive and useless collection of crap in a "set" that no one on your email list probably would ever need. A couple weeks ago, it was "BUY 2 All-Grain Kits Get 1 FREE", which I eagerly clicked only to find that it was buy 2 get 1 free indeed, but you only had 5 to choose from.

In years past, I have known you to have great service and good products, and because of this you have been my primary supplier of homebrew stuffs. But now, with your terrible shipping prices and predatory advertising techniques (I'm pretty sure "Free Shipping!" with a "*on nothing anyone would want" below it is borderline bait-and-switch), I'm signing off on you for good. If you ever fire your marketing department and actually offer reasonable prices again (including shipping), I may take a look, for old times sake. But as it stands, I'm done.

Best of luck as every other online merchant rapidly surpasses you,
Chris
Posted by Chris at 12:53 PM 0 comments

The RocketScience Team enjoys our cider so we came up with a new recipe. It is a crisp and clean apple cider. This cider is complete after being in primary for 4 months!  As a note, we get all our cider from a local orchard and the gravity of 4 gallons is roughly 1.050 with no additions. So here is the recipe:
Crisp Hard Cider
Four gallons of apple cider (No preservatives, No Additives, Unpasteurized)
3 Cans Frozen Apple juice Concentrate
White Labs Cider Yeast (WLP775)
Add yeast to cider and wait 4 months. Try to keep the temperature in the low 70's (70 - 73).

Rack the cider to secondary and add potassium sorbate and wait 24 hours. Next add all three cans of the apple juice concentrate and stir well. At this point, either bottle or keg and enjoy. I serve my cider at 12 psi.

Email ThisBlogThis!Share to TwitterShare to FacebookShare to Pinterest
Labels: Cider


During the holidays the RocketScience Team enjoys a more festive tasting cider. So here is our recipe for our mulled cider, it normally goes really quick!

If kegging:
Rack cider to keg and add concentrate mixture; Carbonate and serve.

Email ThisBlogThis!Share to TwitterShare to FacebookShare to Pinterest
Labels: Cider

This past weekend my wife and I went to the Notre Dame vs Navy game in South Bend, IN. We stayed in Indianapolis for the weekend and visited Thr3e Wisemen Brewing Company located in the Broad Ripple community. 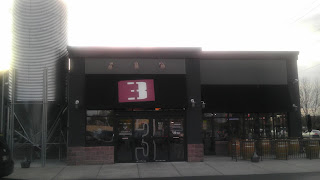 Atmosphere
The interior is all hardwood and the tables are picnic tables and each have a growler in the center. The tables are setup as two four tops but can easily accommodate a group of ten to twelve people by removing the table decoration/separator. Instead of napkins the patrons have a dish towel. I believe this is an excellent idea; not only is it reusable, it is also easy to stock and replace when the time has come. There were multiple flat panel televisions hung from the ceiling, each with a different football game on. I would liken this to an upscale sports bar atmosphere. Instead of bread, patrons are greeted with a small bucket of popcorn and a wide-mouth Balltm jar filled with water.

Beer
Thr3e Wisemen only carries a total of seven beers; four beers and two seasonal beers that are produced on premise, and a "guest" tap. The beers are:  Two Lucy's Blackberry Wheat, Golden Zoe IPA, Centennial Martyr Double IPA, and Snow Bunny Blonde. The seasonal beers while we were there were a cask aged Martyr Double IPA and a Belgian Trippel called the Abbey. The guest tap was a locally brewed Imperial Red Ale. 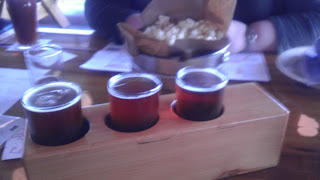 My wife ordered the Two Lucy's Blackberry Wheat and I ordered the beer sampler, which comes with any three beers. I ordered the Golden Zoe IPA, Centennial Martyr Double IPA, and the Abbey. The Abbey an the double IPA were both well balanced beers, however they tasted the same with the exception that the double IPA had a centennial hop finish. I had a few of the Imperial Red and I was my favorite of the evening.

Food
All I can say is it was incredible. We started with two appetizers, the first was Goat Cheese Marinara. 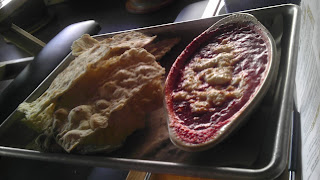 The bread on the side was made from the same dough as the pizzas. I cannot describe the taste other that a sweet marinara paired with a tart goat cheese that was a perfect match. 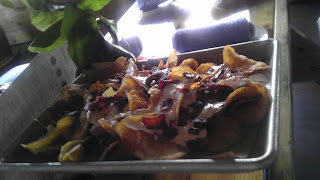 The second appetizer was a loaded chips. The chips were homemade and covered with bacon and your choice of Ranch or Blue Cheese dressing. The last thing we ordered was the pizza special of the month, the Octoberfest. The pizza was covered with Dijon mustard, beer braised bratwurst and sauerkraut. It was a really good pizza, not too much Dijon and just the right amount of sauerkraut.

If you ever find yourself near the Broad Ripple area of Indianapolis, please stop in as I promise you will not be disappointed.
Posted by Les at 9:51 PM 0 comments

Email ThisBlogThis!Share to TwitterShare to FacebookShare to Pinterest
Labels: Reviews


Pecan Harvest is and ale brewed with  pale, Munich, biscuit, and caramel malts and Willamette hops. Real Louisiana roasted pecans are added in the brewhouse and give the ale a subtle nutty flavor and aroma.

This beer has no discernible hop profile or flavor. It is slightly malty biscuit flavor with a light hint of pecans. I cannot detect a pecan aroma. While I do not like heavily malted beers, the Abita Pecan Harvest does not fall into that category, but just barely. If you want a beer that has a nice pecan aroma and flavor you should try the Southern Pecan Nut Brown Ale from Lazy Magnolia.

Food
Tonight for dinner I am having a ribeye, cooked medium, and a baked potato with butter and sour cream. The steak is seasoned with Montreal steak seasoning. In my opinion, the flavor of the beer was not affected, good or bad, by the meal.

Beer
I picked up a single Red Ale from World Market. Marble Brewery is a relatively new brewery located in Albuquerque, New Mexico. The bottle reads:


Our red ale is rich with caramel malts and balanced with a bold, bright blend of Crystal, Cascade, and Simcoe hops.

On first taste the malt comes through but is well balanced with a slight bitter from the hops with a medium Simcoe hop finish. There is a lot of character in this beer and if you like the Simcoe finish you will like this beer.

Food
First, I have no experience pairing beer and food. I like beer and I like food. Tonight for dinner we are having Cajun Style lentils with Cheesy Mettwurst. The cajun spices really hide the malt in this beer but the Simcoe hops are still there and noticeable. Since the meal I am eating takes away the malt flavor from the beer I will say you probably should not pair this beer with any dish that has pronounced spices.

My honest guess is that this would pair well with steak or pork a with basic seasoning or marinade. I would definitely have a few of these at my local pub.