I got a really good deal on a chest freezer around Columbus Day, and am converting it to a keezer. It is a 7.2 cu. ft. Frigidaire model (FFFC07M2KW). It was white until the wife and I painted it with 2 cans of black appliance paint. I also built a stand for it to sit on with casters. 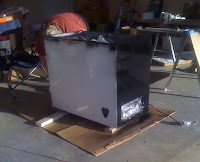 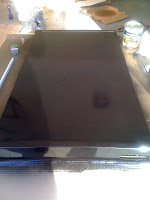 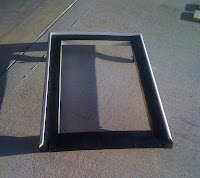 I added a strip of chalkboard paint to the lid; That way I can write out what is on tap. Here are two almost finished photos: 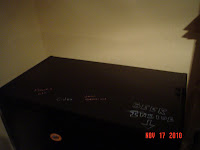 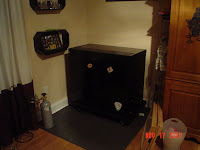 All that is left is to built the collar and install four taps.
Posted by Les at 5:59 PM 2 comments

So last night was the premier of BrewMasters on Discovery channel. The show follows Sam Calagione, Bryan Selders (Dogfish Head lead brewer), and Floris Delee (Dogfish Head Brewmaster) as they create custom themed brews.
This episode had the Dogfish team creating a brew to commemorate the 40th anniversary of Miles Davis' "Bitches Brew" album. They finished with an African Taj beer and mixed it with an Imperial Stout in a 25/75 ratio. The final ABV was 9%; which means we will never see it in here unless it is at a liquor store as Tennessee considers anything over 6% to be liquor.
Also, last night it was revealed that Sam and Bryan had been cutting some Beer Geek Hip-Hop since 2003; The name of the band is The Pain Relievaz. The song they wrote about the "Bitches Brew" was really good, as well as "Pinchin Pennies" which covers the challenge of always having the best brew tools.
Posted by Les at 6:47 AM 0 comments