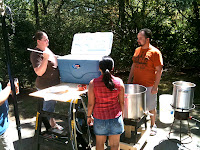 Today, we're brewing ten gallons of Oktoberfest Lager from Northern Brewer's all-grain kit.  Some slacker (read: me) forgot to create a starter for the yeast, so we'll be pitching the massive number of yeast packs (five) that I proofed earlier in the week.
We started out by crushing the grain for the mash tun:

We infused the grain with six gallons of 175°F water from the hot liquor tank and gave it sixty-minute rest at 152°F.
Next, we added 3 gallons of strike water (boiling) bringing the mash tun up to 175°F for a 10-minute mashout.  This is where things went downhill.  The drain on the mash tun clogged, which we valiantly overcame by turning our boil kettle into a mash tun and draining the grain from there into a number of buckets. We finished with a 7-gallon, 180°F batch sparge for a total 14 gallon initial boil.
Of course, there are hops to be had: two ounces of tasty, tasty Hallertau in the boil for sixty minutes (plus a few extra to bring the total volume under 10 gallons.)
Finishing up we added a teaspoon of yeast nutrient, ran it through the chiller, divided it into two sanitzed buckets, and let it sit in the lagering fridge at about 50-55°F for a few weeks.  We'll move it over into a secondary fermenter and let it hang out in the cooler for a total of three months.

Photos after the break ... 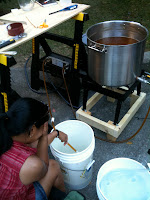 Chilling the beer into the primary fermenter for a 3-month rest.
Posted by ajw at 2:26 PM