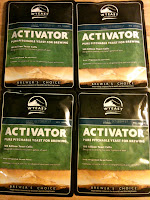 Given the warm weather, the RocketScience brew team has had yeast shipping problems.  Lager yeast has proven itself more sensitive to the warm weather, which has consistently turned 100% of our live lager yeast into dead lager yeast despite any number of ice packs that get sent along for the ride.  Our excursion into lagering has been a learning experience for us, as we've never had problems with ale yeast even during the warmest weather.

We're trying a new tactic.  This weekend, we're planning to brew a bunch of uncrushed grain into ten gallons of Märzen/Oktoberfest wort.  To compensate for potentially dead yeast, we had five packs of Wyeast 2633 - Octoberfest Lager Blend rush shipped a few days ago.  I pulled the activator packs out of the fridge and have just broken the internal yeast nutrient pouches. I'm letting the yeast proof at room temperature for a few days to see which are still alive.

I figure: at least one of those suckers must have survived.   If they all prove viable, they'll be divided between two five-gallon fermenting buckets.  If only some of them are still kicking, they'll contribute to a yeast starter (lagers should be pitched with more yeast than ales.) If none of them survive, we're brewing a porter or a brown ale and holding out for lagers until it gets cooler.

Further news as events warrant.
Posted by ajw at 9:53 PM