The Rocket Science Team spent the weekend in Asheville, NC which is a short hop across the Smoky Mountains from our labratories. Asheville, NC was recently named the winner of the 2011 Beer City USA Poll run by Charlie Papazian. They have 10 breweries, which is the most breweries per capita in the United States. We learned that this is mostly due to the liquor laws which allow self distribution. We went to attend the Asheville Brews Cruise; which was a great learning experience. Before continuing I must declare that I love the IPA style of beer and anything with a lot of hops. Also there are very few Stouts and Porters that I like.

The night before the cruise we had dinner at the Jack of the Wood Public House which dispenses Green Man Brewery beers on tap. They did carry bottles from other breweries but not a single BMC (Budweiser, Miller, Coors) beer in the place. I had a couple of pints of the IPA, while the spouses sampled the Original Sin Cider. 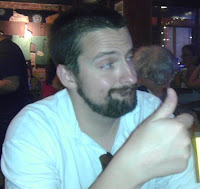 We then headed across the street to the Thirsty Monk, where the upstairs had all kinds of Pilsners, Lagers, Stouts and Ales. However the downstairs is where the action is. All taps all Belgian all the time! The spouses took a liking to the Früli Strawberry Beer while we tried the NCB Le Merle (a Saizon), To Øl First Frontier IPA, and Pauwel Kwak. I would have more pictures but after four different Belgian brews at approximately 10% ABV each, we were not thinking clearly.

The next day we started the tour at Asheville Brewing Company, which started out as a pizza shop until the owner paired up with a brewer. We sampled the following brews: The Houdini Extra Special Pale (aka Great Escape), The Shiva IPA, The Fire Escape (a jalapeno chili brew), and the Ninja Porter. The Houdini was an exceptional pale ale and the Shiva had the same flavor with some added hop bitterness. The Fire Escape was a different, it had the smell and taste of peppers but it really was not hot. The Porter defiantly sneaks up on you hence the ninja name and if we had more time I would have had another. I recommend any of these beers if you can find them in your local store. 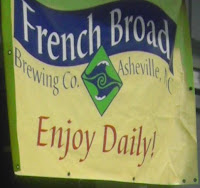 Next up on our bussed tour was the French Broad Brewery where Zane Lamprey's Drinking Made Easy was finishing up a show taping about Beer City USA. There we tried the Gateway Kolsch, 13 Rebels ESB, the new IPA, the Wee-Heavy-er Scotch Ale, and a Belgian Milk Stout. We also had a lively discussion with the brewmaster. Now I have had other Kolsch varieties before but this one was smooth and very drinkable. The 13 Rebels ESB was good but not very bitter and again the IPA tasted like the ESB but with more hop character. The Wee-Heavy-er Scotch Ale was what I would consider a brown ale and very drinkable. The Belgian Milk Stout did not agree with me, however you should at least try a bottle or two to see if you like it.

The final brewery on the tour was the Craggie Brewing Company. Which was located about 2 blocks from the Asheville Brewing Company. What sets Craggie apart from the rest is that they are 100% organic and only use local ingredients. At this brewery we sampled: Toubab Brewe, Antebellum Ale, Dubbelicious, and the Burning Barrel Chipotle Porter. The Toubab Brewe is a Zwickel Beer and could easily be a session beer. The Antebellum Ale is 1840′s American recipe using molasses, ginger and spruce tips. It has an upfront spruce flavor, with the molasses and ginger finishing up. We were also treated to a taste of the Antebellum Ale ice cream. Craggie used some extra wort and made ice cream with it. This is where I asked the bartender for a sample of the Dubbelicious which was an excellent Belgian dubbel. We finished up with the Burning Barrel Chipotle Porter which I think is a standard bourbon barrel porter with a nice hit of chipotle heat just before the bourbon finish.

The thing I noticed about French Broad and Craggie Brewing was that while they both brew beer, both had live music while we were there. In the case of French Broad they had sandwiches and Craggie had slices of pizza for sale. All the breweries on the tour welcomed the public and had vast supplies of liquid refreshment.
Posted by Les at 5:49 PM